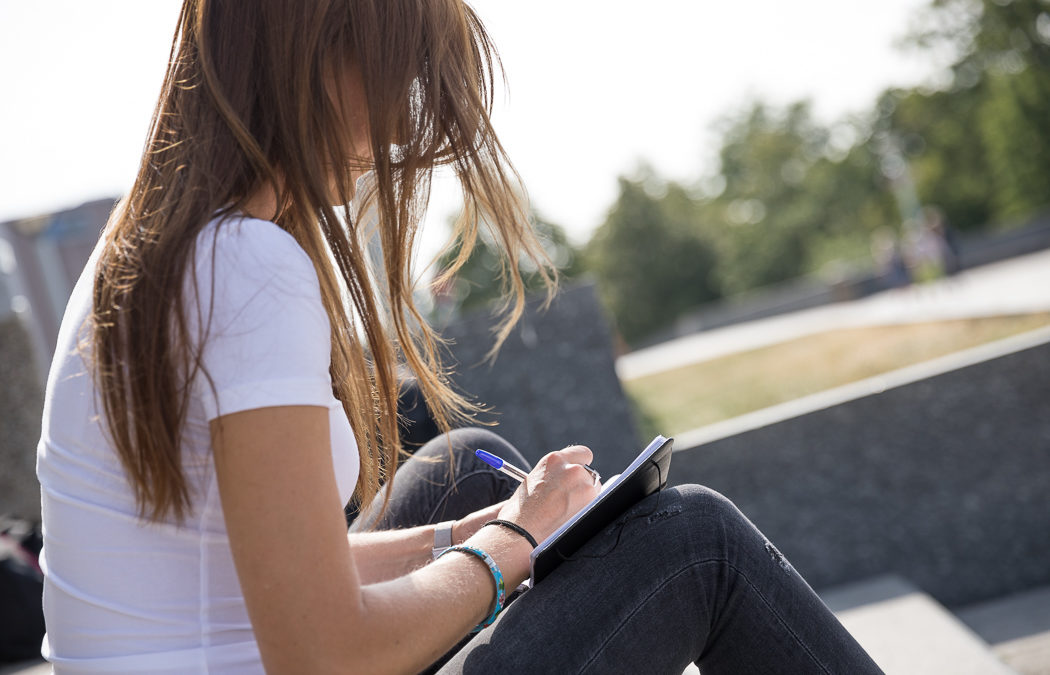 I love writing but I didn’t write for more than ten years. I suffered from writer’s block and I didn’t know it. (Now I am published author with a story behind me and few tips for you).

It was a lovely summer afternoon. I visited my mum and between sips of coffee, I took out one thing after another from my old “memories” box. I wasn’t surprised when I found my old dusty notebooks, pieces of unfinished stories and fairy tales.

On a cover of an old notebook, I read: “Diary or a novel?” My heart jumped.

It was like touching a forgotten treasure or diamonds with rust (I love that song by Joan Baez).

My beginnings as a writer!

It was always there, deep in my heart – a desire to write. So, I wrote. I wrote for the only person in the world. For myself. I wrote because I loved it. It was easy “just to write” as a child or teenager because I had zero expectations at that time. I recalled the feeling I had when I was sitting on a bench, holding an old blue notebook, wearing ripped jeans and an oversized sweater.

I was a writer when I was ten, fifteen, twenty. And what is more – I was a published (!) author. I wrote for a local newspaper – specifically for a section dedicated to young authors. They sent me 50 crowns per article. Sometimes I earned 200 crowns a month because I wrote something every week. It was enough to buy a new T-shirt, a coffee or gas for my mum’s car.

What else did I produce? Fairy tales as a Christmas gift for my teddy bears. I created just one issue of a magazine. The content; a report about a grenade from World War two which my friend found in the forest, political opinion, crosswords, and an interview with a man who remembered World War two. I did it because I loved it. Later, I started my first blog about history.

Then, when I was 21, I wrote something “longer”, maybe a short novel. My friend read it. “It is not good,” he told me. “You are not a writer.” I understood. Another friend told me that my texts are naïve. (Joan Baez, I love your verse: “My poetry was lousy you said” in Diamonds and Rust.)

Then I stopped writing.

Why? I thought that it was a fruitless effort and I was just wasting my time and energy. I put my notebook and pen away because some of my friends did not share my enthusiasm. It has something to do with self- confidence you may say. Yes, I agree. It took me some time to figure it out.

I concentrated on my studies – I studied political sciences. It meant reading and writing a lot. During these years I killed my passion for writing “stories”. Instead of adolescent emotional things I wrote about the Cold War, the transition to democracy and political systems in Africa.

Time to time, I bought myself a new notebook. One never knows.

When I lost (after three months of work) my first job as a junior analyst at the time of the economic recession in 2008, I started my career as a freelance journalist and copywriter. I couldn’t find another job! Writing fond me again. I have been working with words again. I have been writing. Good. But still, it was far away from “my writings”.

Years later, when I was thirty-two, I found myself staring in the window of a bookshop visualizing my novel among the other writers’ books. It hurt. It hurt because I realized that if I wanted my book to be there, I would have to sit down and write.

The story began again. I bought a notebook and pen and I tried to write. It was hard. Very hard. My head was full of doubts. The results were uncertain. I knew only one thing – I must keep going. I must do it for myself.

These questions visited me frequently and almost knocked me down:

I worked on my first novel for more than a year. It was hard job to write the first 80 pages. Then I fell in love with my writings again and I started to create a writing routine: coffee, one sip, excitement.

I finished my novel, put it away for three months and then rewrote it. Editing is tough work because you must delete your own words and you must write new ones; you must read your text again and again and then full stop.

While I was waiting for the answer from a publishing house where I sent my first story to, I realized that I was missing something.

A new story appeared in my mind, so I started to write again – a new wave of excitement. I almost forgot about my first manuscript.

After another three months I received a call from the publisher.

What was the lesson I learned?

Remember: You are a writer. The only thing you must do is to sit down and write – no matter what.